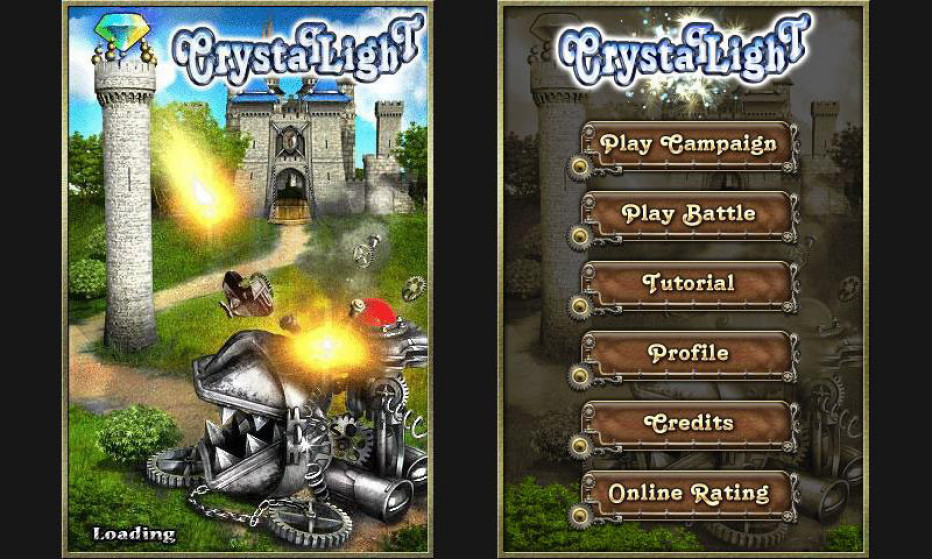 Crystallight Defense is a “tower defense” game with online ratings and hours of exciting gameplay. Mix crystals and force waves, use obstacles and mines! Defend castle by castle in Campaign Mode or play in Battle mode with personal setup.

The game features:
– 40 unique maps (you can replay each to get a higher score)
– 4 base types of crystals, that can be mixed with each other to get unique effects
– 15 kinds of monsters
– 2 game modes
– enchanced online score system (6 tables + table for each castle and user profiles)
– tutorial game level – you can always learn how to play, it’s easy!

Underground Forge produces Iron Monsters of Mech Lord, wave by wave and they run to the castle. The Forge has a wave indicator that shows the order number of the next wave and time remained before it will be activated.

Your goal is to destroy all monsters before they reach the castle and break the Magic Shield. Plug Magic Crystals to towers, and they will shoot at monsters. When you destroy a monster, you get some mana. Use mana to build new towers and other objects, mix and enchant Crystals etc. Be careful: if mana storage is full, received mana will be lost. So spend mana in time.

***Wave forcing***
By default waves of monsters go one by one. But you can force the wave: tap the Underground Forge. You’ll get much score points for all spared time, but the wave will be activated almost immediately and battle will become harder! Wave forcing is necessary to get an Award!

Touch the Crystals palette and then select type of a crystal. The central large cell is a Magic Cell. Use it to mix Crystals. Power and effects of mixing Crystals are merged. When crystals of the same color are mixed, they merge their attack power and effects with better result, but when you mix crystals of different colors you create crystal with multiple effects.

It’s very useful to enchant crystals. Click on crystal to select it and then press one of the buttons: ‘Increase range of crystal’ (crystal can attack enemies from longer distance) and ‘Increase firing speed’ (crystal shoots more frequently).

When 2 crystals of the same level are mixed, level of the crystal becomes higher. Level of the Crystal restricts enchanting abilities of the Crystal, e.g. a range of Crystal of level 2 can be increased to +3, but for level 3 it is +6. Max level is 5.

To get info in game just draw a circle by your finger touch an object, for example, a tower.
Want more info? You can find fully illustrated game description on our site: smartpixgames.com!

“It’s quickly become my favorite game to play on my phone, and the only game I’ve been addicted to more than this one was StarCraft.”

“This very popular tower defense game can keep you engrossed for hours at stretch.”

“Cross a tower-defense game with the Bejeweled-style gem craze, and you get Crystallight Defense.”

“One of the most awesome and good-looking tower defense games on Android platform.”

***Customers about the game***

“Best game ever made. I might leave my girl for this game.”

“Addictive until you win, then when you start over, addictive again”

“Worst game ever created, do not buy, you will play for hours without sleep!”

“Great game. For those who think it’s easy, push yourself by advancing waves in larger groups!”

“Careful, very addicting. BUY AT YOUR OWN RISK :)”